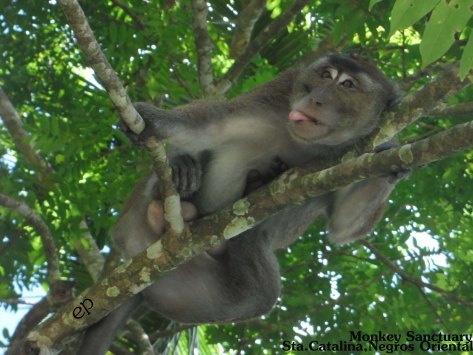 Forests are a source of recreation as well as the ecosystem among wildlife, dense jungle, local flora and fauna, and the subsistence of some endangered species in our country including primates, most kind of which lives in trees especially in tropical areas.

To the hinterlands of Negros island of which are overgrown with dense and virgin forests, the presence of monkeys in the region are in great threat due mainly on growing human population, and monkey hunting drives this species to near threatened status.

In connection with this, wildlife advocates are committed to give a voice for environment and animal concerns, guidance of traditional practice of the tribe, preservation and protection of our biodiversity. The Sta. Catalina Biodiversity Conservation Project was headed by the park chieftain of Brgy Kabulakan Lucas Valor, together with Sta. Catalina Bukidnon Tribe Association and was made possible through the assistance of Foundation for the Philippine Environment (FPE), also in cooperation with local government of Santa Catalina and Negros Island Initiatives for Rural Development (NIRD),Inc.are working hand in hand to reach a common goal of providing a healthy habitat of monkeys in our region into perpetuity.

Currently, there are 50 monkeys in the park and are freely wandering in their natural habitat. This type of monkeys prefers to occupy forested areas near water and are found in higher densities near riverbanks which Kabulakan area is a good spot for them. The reserve area is bordered by a wide river  with mountains covered with dense trees.

It was a delight seeing them not as pet nor confined in a cage.As soon as I arrived, I was greeted by a band of monkeys leaping at the branches to branches, in a strange noise they gathered in the viewing area. One thing they were staring at me is the plastic bag I was carrying, I know they were thinking food inside.

Feeding them is the main activity in the sanctuary, 60 to 90% of their diet are mostly on fruits and seeds and so I bought them some bananas, though they eat other fruits too and some plant matters, foods provided by humans are also being consumed but bananas are the most ideal fruit to feed. 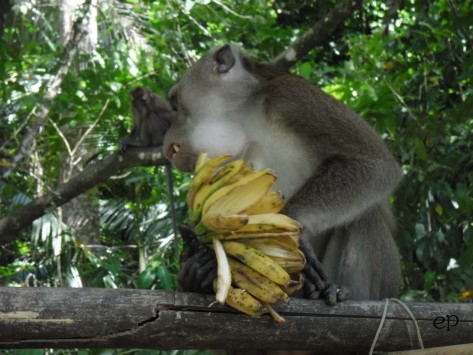 The group or band is lead by a dominant male which is the oldest and the biggest. There were about 20 of them in the viewing area when I visited, the rest were wandering in the wilderness. Caretakers named the leader of the group as “Governor”. He is the oldest and the bravest as I observed, like any other male in the group he has a rude behavior of which I was very cautious . As a result, I just toss the bananas so as they could not come closer. They were good catchers.

The park is open everyday to everyone, no entrance fee is levied, donations are very welcome and of great help for this creatures. Though they are endemic in our country, this monkeys are the frontier specie in the province of Negros Oriental. Visitors may bring any fruit for them or better yet bananas are their favorite.

Saving this animals into extinction is in the hands of mankind, educating people for their conservation should be addressed to everyone specially the younger generations. Let us help in saving our biodiversity. 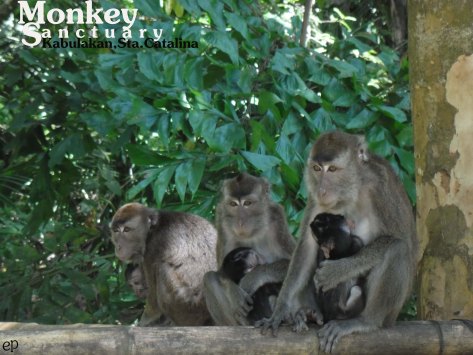 The Wildlife Sanctuary can be reached via Pamplona town or Santa Catalina town proper. Head your way to Brgy. Kabulakan. From the national highway, visitors may walk at around 10 minutes or so to reach the area. Visitors may now easily access the sanctuary through a steel bridge connecting a nearby community to the park. 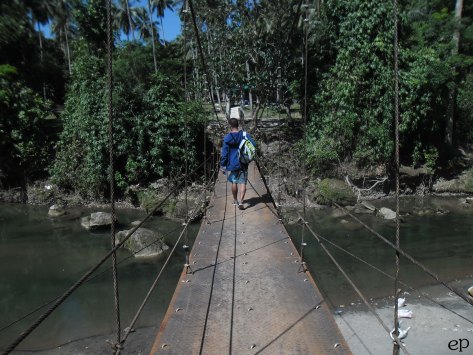 Other things to do:

Aside from interaction with the primates, you may also visit the nearby Mantabios falls. 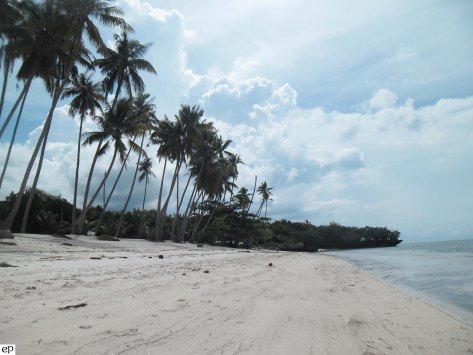 Cang-iping Beach is another display of God’s countless beautiful creation and goodness. When he created our world, HE was pleased of what he saw. And I quote (Genesis 1:31-“And God saw everything that he had made, and behold, it was very good. And there was evening and there was morning, the sixth day.”)

The bustling resort accommodations in Siquijor is mostly found in San Juan town where the shoreline stretches out on white sandy beach. The island is blessed with natural attractions, beaches, caves, verdant mountains, rich in  marine biodiversity.

Before reaching Poblacion San Juan, the white sand shoreline of the town actually starts at Cang-iping followed by Paliton. Both beaches are uncrowded and a scenic stretch of white sands.

From Siquijor town en route to San Juan taking provincial road prior to Paliton Beach, another way to the shore will take you to Cang-iping as shown in the map above.

As soon as I arrived, I was greeted by large fishing boats anchored at the side. A few steps from the parking area, the extension of white sands welcomes me and few visitors with seaweeds washed up ashore.

The group of visitors where preoccupied of taking selfies and pointing each others camera in any angle of the beach, they were delighted seeing the area. Then each of them were saying Hi’s as the camera rolls on a record. Upon hearing their talks, they are visitors from Manila.

I went further to the other end of the beach providing a picturesque natural scenery,who wouldn’t love to be on this place? Under coconut palms, a sunny skies, listening to the breeze, rustled through the sands and the waves lapping at the shore. 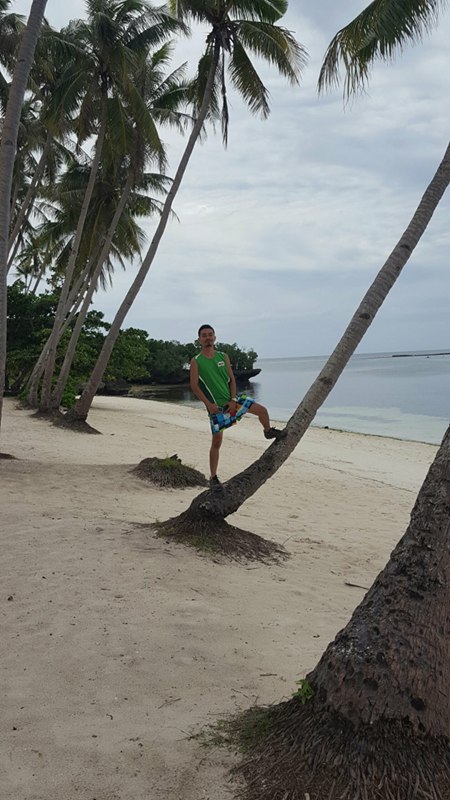 Then my attention was directed to a sign posted. It says ” No Trespassing,Private Property”. There is a distinctive structure nearby but I wasn’t sure if its exactly connected to what I’m thinking. The exterior color resembles that of a popular resort in San Juan.

Confirming my thought from a batch mate in college who lives close to Paliton Beach, she says, part of Cang-iping is actually owned by Coco Grove Resort. I was right. Paliton, Cang-iping and Cambusyo Beach were actually her grandparents property, and that, she is one of the successor.

I hope the silhouette of this area continue to exist if it’ll be developed into a future accommodation. When visiting Siquijor, make your way to Cang-iping before it gets too crowded, or how about spending the rest of the afternoon here as this is a perfect spot to watch the sunset. 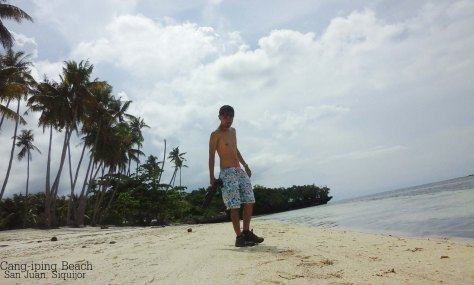 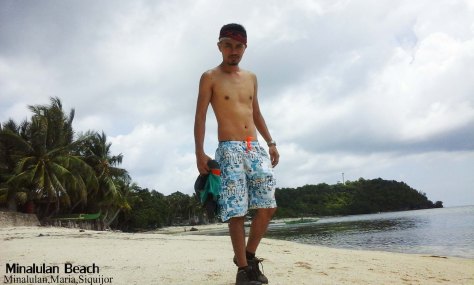 I always contemplate of living someday on a beach. I thought of how is waking up early in the morning on a beautiful beach just a few steps on my bed.  Fortunately, to the residents of Brgy Minalulan don’t have to dream of that.

Brgy Minalulan is a coastal area of Maria town in the province of Siquijor. Being a coastal area, fishing is a sustaining livelihood here and is mainly dependent on the abundance of marine environment along Maria bay.

Manifested on their long beach, I’ve seen a great number of fishing boats. Most of the settlements in the village are put right next the shore which is one of the longest beach in the island next to San Juan shoreline. The beach has a long stretch of white sand, and incredibly, I was the only visitor ambling on its sands.

It was with great pleasure seeing two kids enjoying their playground, the beach, the white sands, the sun and the waves. Aside from the backdrop view of the sea, a noticeable structure part of the scenery serving as a navigational aid is the Minalulan lighthouse. 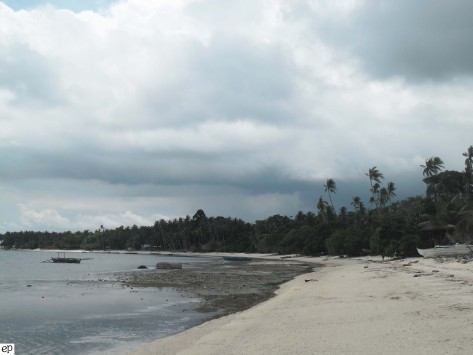 As you can see on Googles embed map above. From the main town of Maria as the starting point. There are three routes you can take to get you to Minalulan.

The long beach of Minalulan can be accessed to anyone, free and open to the public, no resort accommodations. Explore  Siquijor beaches, explore the town of Maria, discover Brgy Minalulan today and wiggle your feet to another uncrowded beach of Minalulan. 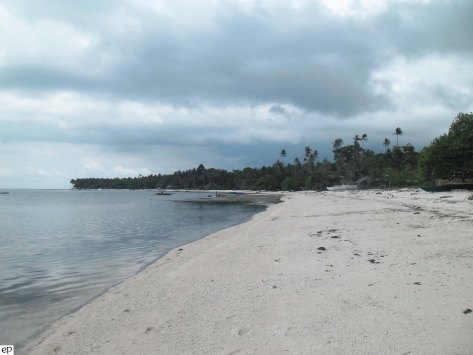